If you’re looking to learn or teach Cinder Drift (Extreme) a.k.a. Ruby Weapon EX, here is a curation of the most useful resources available to you. I’ve watched, read, and reviewed all the video guides, text guides, and other resources I could find. Below are the best ones that will help you understand and clear the fight and all its mechanics.

If you’re new to doing endgame content through the Party Finder in general, you may find some useful tips in this post about savage raiding.

If you’re only struggling with one specific mechanic, check here.

Two of the earliest mechanics in the fight can be tricky for some players to pick up on. Helicoclaw and Ravensflight both occur in Phase One, and if you’re still not surviving them consistently, check out these visuals below.

A lot of people make video guides, but some use uncommon strategies, and some have too much filler talk. Here are the best videos I’ve come across. See which one sounds right for you or your group to learn from.

Ilya walks through a single fight recording as a DPS (Red Mage). No text overlays or infographics, just fight footage, pausing for the lengthier explanations. He follows the fight one mechanic at a time explaining what they do and how to handle them. It’s missing footage of the last couple mechanics of Phase One due to high group DPS, so he mentions what would happen: a repeat of two earlier mechanics (Ruby Ray and Ravensflight).

Strategy Used: It’s implied that in Phase Two Meteors his group had assigned clock positions, and did a callout in voice chat to indicate the eighth meteor. In Party Finder, players place the eighth close to the boss instead.

While the video is shown from a DPS PoV, he still mentions which attacks are tankbusters, raidwides, or other Tank/Healer tasks, such as tank comets in Phase Two. Overall it’s an excellent video guide for someone who wants to understand the workings of each mechanic; this is what I used to learn the fight.

MTQ’s guide uses video clips and slow motion edits from a mix of Tank (Paladin) and Healer (White Mage) perspectives. Text overlays are used for bullet-point summaries of each mechanic as they come up. All mechanics leading up to enrage are shown.

Strategy Used: In Phase Two Meteors, players use the same assigned positions as Phase One Ravensclaw, and the eighth meteor is placed close to the boss’ hitbox. Common in Party Finder.

If you’re used to MTQ’s guides you’ll find this one has everything you need. Personally I find the explanations to be a little fast-paced, but definitely thorough. This uses the Meteor strategy I’ve seen the most in Party Finder, because it keeps more melee uptime.

HungryChad’s video guide has no voice commentary, so you can watch it muted and not miss a thing. It’s a combination of text slides and infographics mixed with slow-motion video clips from a Tank (Paladin) PoV of the relevant mechanics. He skips over repeated mechanics such as the end of Phase One.

Strategy Used: In Phase Two Meteors, players watch for their numbered meteor and move to the appropriate position to place it from 1-8 marked around the arena. Uncommon in Party Finder.

This is a useful video guide because you can watch without sound, and pause if needed to study the infographics. The Phase Two Meteor strategy seen here is uncommon in Party Finder, so keep that in mind.

Hi_Im_Fox – Commentary and infographics from clips with uptime focus.

Fox uses clips from a DPS (Melee) perspective with strategies and positioning that keep melee uptime. He doesn’t cover the last mechanic of Phase One (second Ravensflight) because it’s often skipped due to high DPS. He includes some helpful infographics for positioning, especially in Phase One for Helicoclaw, Ravensclaw, and Ravensflight.

Strategy Used: In Phase Two Meteors, players use their assigned positions to drop their meteors, with the eighth one being placed close to the boss’ hitbox. Common in Party Finder.

I recommend Fox’s video guide if you do better with infographic visual aids, as he includes quite a few. He also uses the most common Party Finder strategy for Meteors.

Lyra’s guide is extraordinarily in-depth so definitely check this out if you’re looking for a good non-video guide. It includes an index of mechanic names and descriptions, a timeline of events, and a strategy walkthrough. It’s the first guide I’ve seen to include role-specific tips as well.

Attack of the Fanboy, Brandon Adams (Phase One) (Phase Two)

Brandon’s guide is also well done and contains descriptions of each mechanic, a timeline of them, and finally talks you through the tactics needed to complete the tricky parts of each phase. It’s written with a bit more flavour, which may help you absorb the information better depending on your learning style.

There are lots of macros floating around, with various changes to positioning so be sure to check the in-game chat to see what your specific party is doing. I’ve seen some macros that do not include Cut & Run positioning, and the group just freestyles it.

Here’s a basic macro to get started. Note that this has the North spot given to Melee 1 instead of Main Tank, for better access to positionals. 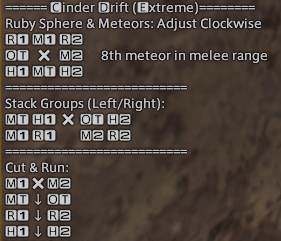 Let me know if you’ve made use of these resources to help people learn this fight, or if you’ve found other tools to guide you. I’m still keeping an eye out for anything that can assist players of different learning styles get into this content, and will update the post as needed. 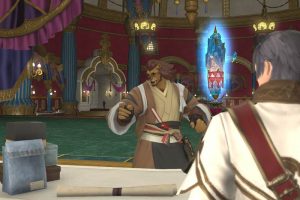 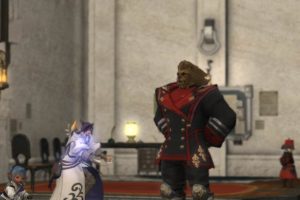 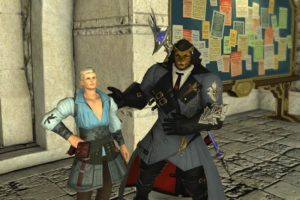