Desynthesis is a function that lets you break down your unwanted equipment into its component materials and sometimes even obtain rare items. Not all gear can be desynthesized, as you’ll see near the bottom of the item’s tooltip. It will either display the desynthesis level if you can, or an ‘N’ if you can’t. You can also check by right clicking the item and seeing if ‘Desynthesis’ appears in the list of options. 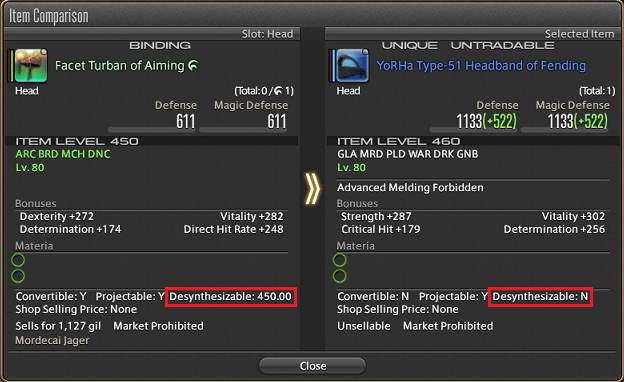 You can unlock desynthesis by taking on the quest ‘Gone to Pieces’ which requires a crafting job at level 30. After completing the quest, you may desynthesize any ilvl piece of equipment as long as you are at least level 30 on the appropriate crafting job. CUL is a unique crafter since it desynthesizes fish instead of equipment.

One of the biggest changes that came with patch 5.1 is that you no longer have to choose which crafters’ desynthesis to max out. There isn’t a collective cap anymore so you can level all of them to the maximum level of 460.

What Can I Get From Desynthesis?

The materials you’ll get from desynthesizing an item include one of the base components used to make the item as well as elemental shards, crystals, or clusters, depending on both the item level and which crafter it’s made by. It’s possible to get HQ components even if the equipment was NQ.

You can desynthesize dungeon gear as well, and it breaks down into components used to craft similar level items. For example, the level 73 Voeburtite Ring of Casting from the Dohn Mheg dungeon can be desynthesized into a stonegold ingot because that’s what a Goldsmith would use to craft the similar level 72 accessories.

The Warg Bracelet of Healing from the Grand Cosmos dungeon can be desynthesized into a dwarven mythril nugget because that’s the intermediate component used to craft level 80 accessories. This item also gives wind clusters instead of crystals, possibly because it’s a piece of dungeon loot from a level cap dungeon.

The level 80 dungeon drops can also yield the Sublime Solution as a rare item, which is otherwise only obtainable for white crafter scrips. Interestingly, you can get this rare drop without levelling your desynthesis up to the equipment’s desynthesis level. However, once your skill level is up there you may yield multiple sublime solutions per item.

This ingredient is used in crafting current top-tier equipment for crafter and gatherer jobs, making it pretty valuable. That’s why I always roll for loot in the Expert Roulette dungeons: for the chance at obtaining a couple of these from desynthesis.

If you’re looking to get the most of these you can, work on levelling your goldsmith desynthesis up first. All the level 80 dungeons drop accessories they can desynthesize, while only the Grand Cosmos and Anamnesis Anyder have drops for other crafters.

The newest level 80 dungeon, Anamnesis Anyder, drops equipment that can rarely be desynthesized into Dried Hi-Ether, another material that’s used in higher tier crafting. The only other way to get it is to buy it for Tomestones of Phantasmagoria.

This is a valuable item for those interested in savage raiding because it’s one of the ingredients in the most potent tinctures, which are temporary stat-boosting potions. If you don’t craft, you can sell it on the Marketboard for consistent gil, especially when people are stocking up on pots for their raid nights after the Tuesday reset.

I’ve also had a number of Anamnesis items desynthesize into the 2 star intermediate crafting materials. I’ve seen Prismatic Ingots, Ethereal Silk, and Chalicotherium Leather, so I have to assume Sandalwood Lumber and Tungsten Steel Ingots are also possible results, depending on the associated crafter.

Extreme Trials also drop gear that can be desynthesized. These pieces have a chance to drop crafting materials. For example, the weapons from The Dancing Plague (Extreme) can result in the Dancing Wing item, which is used in the recipes to craft the Titania Barding and a housing item. Similarly, the accessories from The Crown of the Immaculate (Extreme) can break down into the Immaculate Wingblade item.

Note that these rare desynthesis results are not possible in high-end trials. Current endgame trials will not have their gear desynthesize into these valuable items in order to prevent people from rolling Greed on everything constantly. It gives other players a bit more of a chance to pick up an item they actually plan on using, not destroying.

You can also sometimes get battlecraft, fieldcraft, or clear demimateria. The clear ones (yellow) are just for autoselling, but I often hold onto them to turn in at the Doman enclave. This lets me get my weekly gil with just a few high value items rather than scrounging up a bunch of combat materia or NQ equipment.

The battlecraft (red) ones are mostly just lower value autosell fodder since the items they’re used to craft aren’t really useful anymore. However, battlecraft III demimateria is needed for crafting the glowy primal weapons from ARR and HW trials. These ones may be worth keeping so you can make those when you get the drops from trials, or at least checking the marketboard and trying to sell them there to other players.

How Do I Level Desynthesis?

Each crafter has a separate desynthesis skill level, and you level them up simply by breaking down items. You get larger increases in desynthesis skill for items that are of comparable or higher desynthesis levels to your current skill. This means you can’t just buy a bunch of low level gear from a city vendor and use that to power level. At a certain point it will stop increasing your skill. 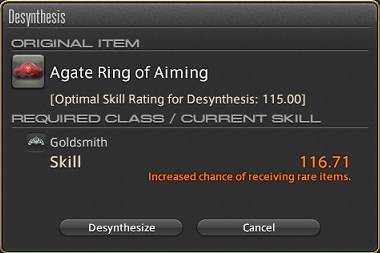 One of the great changes with 5.1 is that there is no chance of failure when desynthesizing, so you can use any item, even if it’s much higher than your current skill level. This is a very welcome change in my opinion. Of course, having a higher skill does mean you get a chance at rarer item results so it’s still useful to level up.

Two very useful items to have while levelling are Bacon Broth and Tinker’s Calm. These increase the amount of skill you gain for their duration. The Tinker’s Calm buff only lasts 10 minutes, while the Bacon Broth lasts for the regular meal duration of 30 minutes and is extended by things like FC buffs. You can buy these craftable items on the marketboard.

If you’re slowly levelling through dungeon drops then it may be worth stockpiling a bunch, putting these buffs on and then doing them all at once. If you don’t have the inventory space, or if you don’t care about spending extra gil on buffs, then you’ll probably go through more of these medicine items.

If you’re using NPC vendors to level, look for the cheapest types of items. You don’t need to buy a chestplate for 40k gil when a 15k gil shield will level your ARM just as well. You may have to do some browsing in menus, but shields, belts, and accessories are less expensive options. Weapons, tools, chestpieces, and pants are the most expensive items, while helmets, gloves, and boots are in the middle of the pack.

Jewelers tend to have cheap accessories for GSM (battlecraft), LTW (fieldcraft) and CRP (tradecraft). The Armorers have belts for WVR and the Arms Dealers have shields for ARM. BSM and ALC usually have to rely on pricier weapons, and CUL has to find fish on the marketboard.

The Tholl Junkmonger in Tomra (Kholusia 11.9, 8.8) has some of the highest level vendor items and will work to max you out. If you’re looking for the expensive, lazy way then go to Tomra, hunker down, and start desynthesizing. You can find cheaper items if you hit up the vendors in the earlier cities first and work your way up as your skill increases. Here are some of the places to look.

The main city vendors have appropriate level gear for you to buy for gil, and you can also trade seals to your Grand Company for gear up to level 70. However, there are also a few level 160 items for CUL, ALC, BSM, and CRP under the Material tab of the GC Seal Vendor.

The GC items can be pretty pricey in terms of seals, but if you find you’re always capped on them anyway, you might as well put some of them to use levelling your desynthesis skill.

There’s a bit of a gap between ARR and Heavensward, but you can just skip straight to Ishgard once your skill gets too high for ARR items. There are four NPC vendors of interest in Ishgard at the Jeweled Crozier. A Jeweler, Armorer, Weaponsmith, and Fieldcraft Supplier. Between them you can find a lot of different level items going up to 260.

The Kogane Dori Markets in Kugane are where you’ll find the relevant vendors. A Jeweler, Armorer, and Arms Dealer.

In The Crystarium’s Musica Universalis Markets, there’s a Jeweler, Armorer, and Arms Merchant that should have you covered with level 70-80 gear. Between these and the Tomra vendor you should have everything except Culinarian taken care of.

Remember to keep your Bacon Broth and Tinker’s Calm buffs refreshed, and use your retainers’ quick venture findings as more desynthesis fodder. It will take a lot of time (and/or gil) to level these skills up, so just keep plugging away at them. If you’re looking for one crafter to focus on, I recommend goldsmith first for the chance at getting more sublime solutions.

Have you tried your hand at the new desynthesis mechanics since 5.1? What do you think of the changes: better, worse, or about the same? I expect more people will be getting into it now that it’s more accessible. Let me know down below.

I'm an avid gamer who loves to think about efficiency, planning, and general geekiness applied to my favourite video games. I write guides and offer tips to help new and returning players. Some titles I play include FFXIV, League of Legends, Fire Emblem, and Minecraft.

Hey there, I’m Banesworth. Welcome to Late to the Party Finder – a blog and resource for new and returning players who want to learn more about Final Fantasy XIV Online. I hope to introduce you to some of the game’s features you haven’t explored yet. Better late than never! 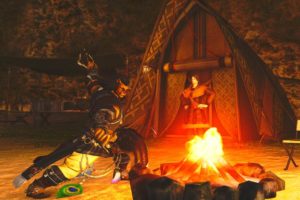 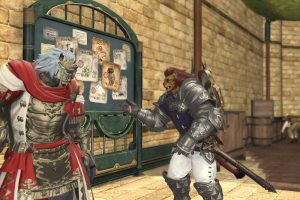 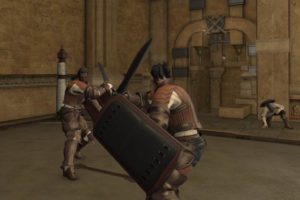