The first trial you’ll encounter in the Shadowbringers expansion is The Dancing Plague, featuring the fairy king Titania as a boss. At level 80, this was an excellent Extreme Trial to get new players introduced to endgame fights, and there was a lot of learning going on in the Party Finder. It’s on the easier side, so it’s great for getting your feet wet if you want to try out something more difficult than the MSQ.

Now the fight is no longer current, but you’ll still see lots of groups running it for the mount and weapon glamours. My goal is to set you up with the best resources to prepare yourself if you’re new to this trial. If you’re new to endgame raiding in general, especially through the Party Finder, check out this post on getting into savage raiding for some tips.

If you’re looking for specific information to prep for this fight, skip to the relevant section. I’ll cover common pitfalls to avoid, video guides, text guides, and help on macros and fight setup.

There are a couple of mechanics in this Extreme Trial that are likely to confuse players, especially those less familiar with the fight. Here are the ones to watch out for:

Phantom Rune – The first two are scripted. It’s always point-blank first and donut AoE second. However, after the add phase it’s random which one comes up next. Look at Titania’s wings. Spread out wide means point-blank damage. Tucked in means the safe spot is in her hitbox.

Chain of Brambles – Always start near the center of the arena for this cast. If you’re too far from your partner the chain will be very difficult to break. For the cast during the add phase, position so that you’re knocked back into a safe corner that’s not getting slammed by the vines.

Mist Rune – The second Mist Rune occurs after the add phase. But before you head to your water puddle, wait and dodge the Phantom Rune. It will go off first, and if hit, the debuff will cause Hysteria, making you lose control and preventing you from covering your assigned water puddle.

Frost Rune – This isn’t a mistake, exactly, but most players will stand in the center of the arena and soak the single hit, rather than trying to dodge any of them. This is fine because it doesn’t afflict you with a damage down debuff or anything, and most players’ gear is good enough that it’s not a problem to heal through.

This fight has been out for a long time, so lots of people have made guides on it, but some of them are quite lengthy. Others have poor explanations of important mechanics. Finally, some guides show strategies that are no longer used in Party Finder.

These guides were all fine when the fight was released, but now high level players out-pace the content. I watched over 10 different guides, and the only one you need right now is this one:

This is by far the best guide out there for this fight. Mizzteq is consistent in general, but for some reason many of the other creators’ guides for this particular trial just don’t hold up. Mizzteq uses text overlay to provide bullet point style notes on each attack, along with her verbal explanation, something almost no other guide for this fight has.

Strategy Used – the lightning tether is picked up by the Offtank, who uses an invulnerability cooldown to take the first three hits. The tether is passed between three other party members afterwards. Common in Party Finder.

This is the only guide I watched that had an infographic for handling the add phase’s mess of mechanics. That section is at 6:23.

Some people need a text guide that they can easily read at their own pace. It’s also nice to have in case you’re killing time out in public and don’t have headphones with you. The Balance has you covered, as Kiri Kotone has provided a solid guide that does a good job explaining the fight. I will say though, some of the strategies here do not match current Party Finder methods.

This guide lists the mechanic names and describes them, and includes a list of the attacks in the order they occur. After that, the Fight Strategy section covers the way to go about solving each mechanic.

The first thing to note is that this guide has Flame Rune groups at the North and South positions. You should be aware that it’s much more common in Party Finder to group East and West. For the Thunder Rune tethers the Offtank will almost certainly take multiple tethers, so you don’t need to mark 5 players for that.

The guide is really easy to skim and find what you need because of the format. It’s the best text guide available, and you should also check it out if you need tips for your specific role.

Syldris has made these timeline images for several endgame fights and I find them pretty useful, especially as a Tank or Healer. You can check the timestamps to see where you can fit your most potent cooldowns and when they’ll be available for use again.

While this won’t tell you how to clear each mechanic, it will serve as a reminder of what’s coming up next if you have trouble remembering. Just glance at this and the colour coded attack names make it easy to see what type of mechanic is about to happen.

Since the maximum item level is significantly higher than it was on Titania’s release, your party’s damage output should be noticeably higher than expected. This may cause some mechanics to be skipped, so keep that in mind if you’re looking at the later timestamps in this timeline.

There’s a macro by Mia Maine that covers all the important mechanics, but you probably want to modify the thunder tether section to have the Offtank take more of the hits. This is more common in Party Finder groups because it puts responsibility on fewer people’s shoulders.

You can definitely handle this fight without a macro. While it might help make things slight faster to call out your positions (M1, H2, etc.) you just call out your water puddle spots (NE, W, S, etc.) and identify how your group will do the Thunder Tether.

For example, I was recently in a Party Finder farm group that only called out cardinal and intercardinal positions at the start of the fight, and didn’t lay down any waypoints. The only thing we had to discuss was how many thunder tether strikes the Offtank could take. We had them take the first four and then swap out for the last two, taken by a ranged and then a melee.

Anyone who feels comfortable and counts the strikes can fill in for those tethers, regardless of role. If you’re worried about miscounting, you can mark the designated players with number markers. That way only the first person has to keep track and the second or third can just follow the numbers overhead.

Did you find these guides helpful in tackling Titania Extreme? And what did you think of the difficulty of the fight to pick up and clear? Harder or easier than other Extreme Trials? Let me know in the comments. 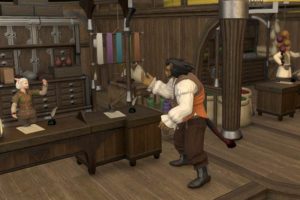 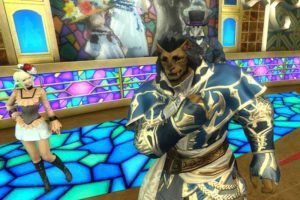 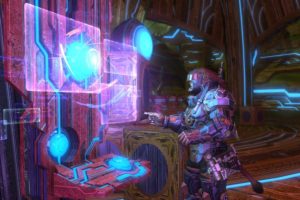