Your Chocobo Companion is special, and you want it to stand out from the crowd, right? Amid a sea of Desert Yellow Chocobos, yours could be an eye-catching Royal Blue! A Regal Purple! A…Mud Green? The choice is yours, so here’s how to go about changing your Chocobo’s pretty plumage.

What Colours Are Available?

The available colours for your Chocobo are (most of) the same ones that you can dye your in game clothing. Some exceptions of course include the dye tab with the ‘general-purpose’ colour names. This is the section with ‘Pure White’, ‘Jet Black’, metallic colours, pastels, and some others. No shiny metal Chocobos allowed, unfortunately. I guess you could always give them some plate armor style Chocobo Barding if you’re after that shiny look.

If you’re looking for references to see what your Chocobo could look like, I found this tumblr post that has in game screenshots of the different colours. This must have taken a lot of time to collect and is definitely a much appreciated resource!

If you want to quickly skim and compare them, use the archive view, just be aware that for a few of the colours the preview is just text. Be sure to click on them if you’re interested in those colour names, or if you want to see a side view of any of the Chocobos.

Can you Make your Chocobo the New Dye Colours?

In Patch 5.21, new dyes were added, available through the Ishgard Restoration content. A few of these were in the fancy dye section (Gunmetal Black, Pearl White, and Metallic Brass), probably because they have similar metallic appearances to other dyes in the same category. I don’t think anyone expects these colours to be viable for Chocobos, at least at this time.

However, some of these dyes were added to the regular colour sections. New red dyes include Ruby Red and Cherry Pink. The yellow tab now includes Canary Yellow and Vanilla Yellow. Finally, to the blue hues they’ve added Dragoon Blue and Turquoise Blue. Perhaps these are new Chocobo options?

My testing suggests that no, these are not available Chocobo colours. My attempt to get a Ruby Red Chocobo resulted in plain old Blood Red (details in Colour Changing Mechanics further down). Hopefully in the future we can get such bright plumage on our feathery friends.

How to Change Your Chocobo’s Colour

Once you’ve unlocked your Chocobo Companion you can change its colour right away, provided you have access to a Chocobo Stable (in player housing) and can buy the necessary fruits from the Marketboard. For new, low level players this is probably easiest by joining an FC with an Estate and a Stable.

If you don’t have an FC, or if it just doesn’t own an Estate, you can also access a Chocobo Stable if you’ve got an Apartment. Each apartment complex has its own Stable just outside the building where you can interact with your Chocobo Companion.

The method to change its feathers is to feed it fruits, which are grown through gardening and sold regularly on the Marketboard. After selecting ‘Tend to My Chocobo’, you’ll want to select ‘Feed’ and then give it a fruit to start the plumage change process. 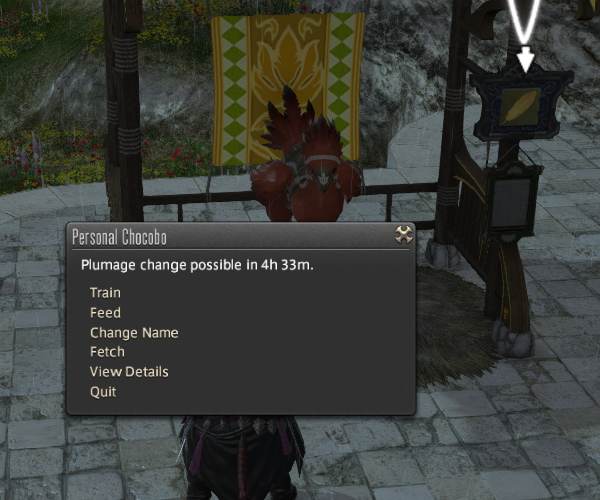 You then have a six hour window after which your Chocobo’s colour will change based on what combination of fruits it has eaten. I usually just feed my Chocobo buddy all the fruits right away, but you do technically have the full six hours to do so. You can only feed one fruit at a time, so just note that it is a bit of tedious clicking.

You can see how much time is remaining before the colour change by going back and checking the ‘Tend to My Chocobo’ window.

The greatest tool available is the FFXIV Chocobo Colour Calculator, created by Chop Chop. You plug in your starting Chocobo colour and your desired Chocobo colour, and the calculator will tell you how many of each Chocobo food to feed it. 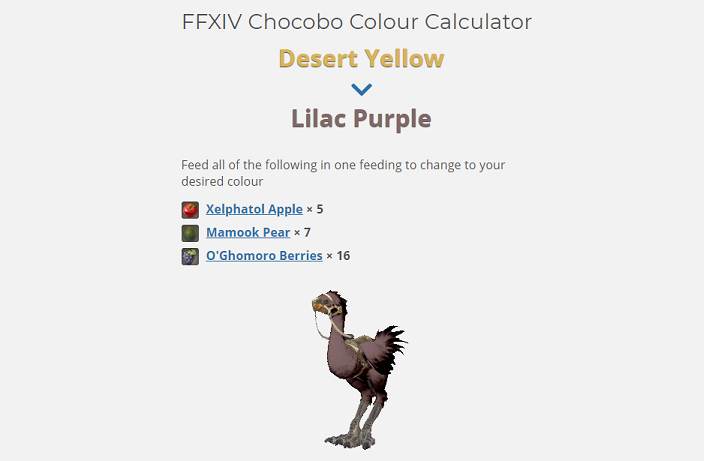 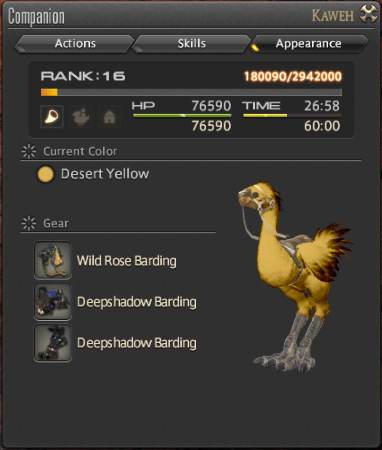 If you don’t get the colour you were aiming for, there are a couple things to check. When you do try again, either use your new colour as your starting colour, or reset your Chocobo to the default ‘Desert Yellow’. To do this, feed it a Han Lemon. You can pick up a Han Lemon from the Marketboard really cheap (at least on my server). You don’t have to wait the six hours again when resetting the colour this way; simply exit the Chocobo Stable interface, and then go back in.

If your starting colour was the default Desert Yellow, then it’s possible you exceeded the limits of one of the RGB values (0-255) somewhere in the middle of the feeding.  Be sure to follow the recommended feeding order listed at the bottom of the Colour Calculator results page. There’s even a handy checklist you can cross off as you go, so you don’t lose track. 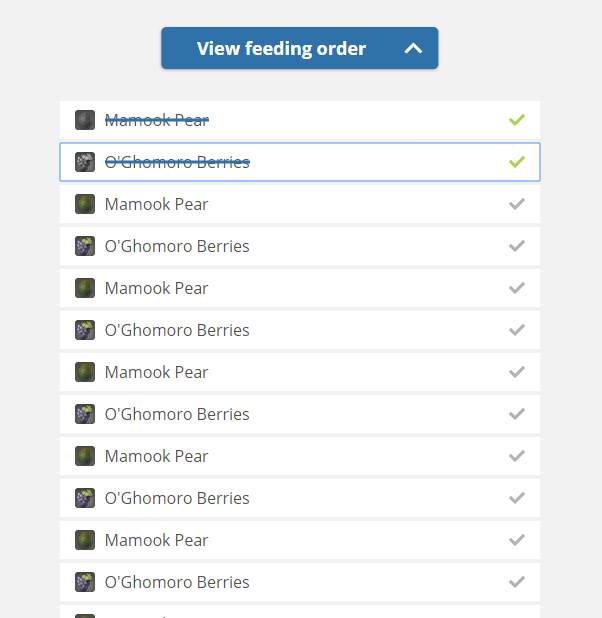 If you’ve dyed your Chocobo previously, it could be that your Chocobo’s starting colour did not accurately represent its ‘true’ colour (i.e. its RGB values). I recommend resetting with a Han Lemon before trying again, since its RGB values will then be accurate.

Each of the colours has a set of associated RGB values, listed here. Your Chocobo begins as Desert Yellow for example, which has RGB values of (219, 180, 87). Higher numbers lead to light, bright colours, while lower numbers give dark, deep colours.

The way you change your Chocobo’s feathers are by feeding it fruits while it’s stabled. Each fruit increases or decreases the RGB values, so a specific amount of various fruits will get you from your starting values to your target values.

Of course, there are only so many available colour options, but many more combinations of values, so if your Chocobo’s RGB values don’t precisely match one from the list, an approximation will be made to result in the closest colour.

This is how I tried to see whether the new dye colours are options for our Chocobos. By maxing out the red value and minimizing the green and blue values (255, 0, 0), that should have resulted in the very bright, vibrant Ruby Red. Unfortunately, the result was the fairly distant Blood Red (145, 59, 48), so I think it’s safe to say the new dye colours are not Chocobo approved.

I used 21 Doman Plums, 2 Mamook Pears, and 2 O’Ghomoro Berries (-125, +105, +105), compared to the calculator which would have recommended 12 Doman Plums, 6 Valfruits, and 4 Cieldalaes Pineapples (-10, +50, +70). That would have left me at (245, 50, 70), which I suspect might have represented itself as something like Colibri Pink or Coral Pink. This may explain some colour change failures and is a good reason to use a Han Lemon to reset the RGB values if you just can’t seem to get to your desired colour.

Have some fun with your Chocobo and change up its colour if you haven’t tried it before. If things go wrong you can always reset it to the default ‘Desert Yellow’ using a Han Lemon. Remember to use the Colour Calculator, and follow the feeding order for the most effective (and most tedious) results.

I’m very curious, what colour Chocobo do you have? And what influenced your decision? Let me know in the comments.

I'm an avid gamer who loves to think about efficiency, planning, and general geekiness applied to my favourite video games. I write guides and offer tips to help new and returning players. Some titles I play include FFXIV, League of Legends, Fire Emblem, and Minecraft.

Hey there, I’m Banesworth. Welcome to Late to the Party Finder – a blog and resource for new and returning players who want to learn more about Final Fantasy XIV Online. I hope to introduce you to some of the game’s features you haven’t explored yet. Better late than never! 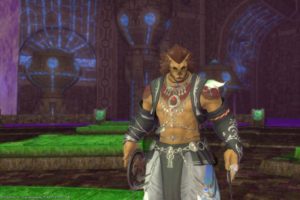 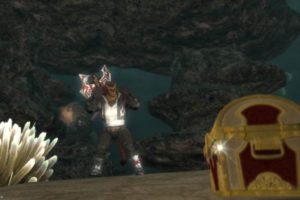 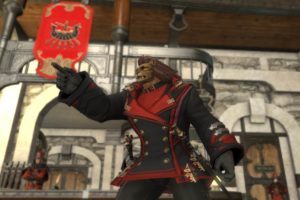