Every once in a while you find out something you’ve been doing wrong since forever, and all you can do is spread the word and try to stop others from making the same mistake.

When I was still relatively new to FFXIV I spent my excess company seals on whatever items I needed, or thought I would need in the future. Often that would be ventures, glamour prisms, and dark matter. It wasn’t until much later that I discovered that one of those purchases is an absolute no-no.

What is Dark Matter?

If you’ve got crafters levelled up, Dark Matter is what you use to repair your own gear, Grade 8 being the one for level 90 items.

You can repair equipment for yourself or a party member mid-duty as long as you have Dark Matter in your inventory, so keeping plenty on hand is a good habit to get into. At least I was right about that part.

Where Do You Buy Dark Matter From?

You might currently be stocking up at your Grand Company shop like I was, and if you are, STOP. This is inefficient!

Grade 8 Dark Matter costs 600 seals at your Grand Company, or 280 gil at any of the designated merchants in a major city.

You know what else 600 seals can get you? Duck Bones. These are worth 360 gil if you just autosell them. Take that 360 gil, go buy your Dark Matter, and pocket the 80 gil difference.

Every stack of Dark Matter you buy with company seals is 8,000 gil you’re flushing down the toilet. Tataru would be absolutely furious!

It’s actually even more than that, because Duck Bones are only the lowest effort purchase you could make. If you actually wanted to convert your seals to even more gil you could buy items to sell on the marketboard, like Glamour Prisms, Glamour Dispellers, or Coke.

So if you want Dark Matter, get used to being a regular customer of your city merchant of choice. Fahruvvet in Radz-at-Han is directly northeast of the Aetheryte Plaza so that’s the one I use, but there’s one in every city hub. Here are the ones in the three starter cities: 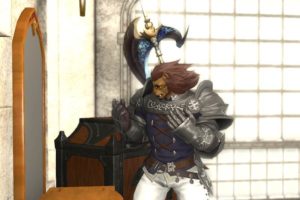 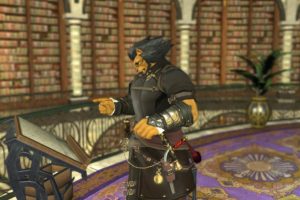 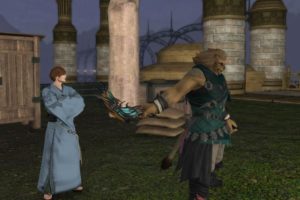